Let Me Introduce You to My Dear Ones, Now Departed

Some talk to the living and get wisdom. I talk with the dead and imagine the wisdom they would have imparted to me. I bring questions to them and also present them with problems and challenges I face in my life. And I gain wisdom from what I imagine to be their different perspectives.

My first imagined conversation with my parents and grandparents, Zichronam Livracha, of Blessed Memory, took place in October 1999. The subject was God and Prayer and since then we have other conversations on a wide range of topics. After my Aunt Claire LeBrint Metzger and Uncle Rolland Metzger died, I expanded the conversation to include them along with my Aunt Perle LeBrint.

Let me introduce you to my loved ones, now dead, who participate in conversations with me, along with a few snippets of wisdom from other conversations I've had with them.

My mother, Rose LeBrint Fuchs, who died in January 1991 and my father Leonard (Len) Fuchs who died in March 1997.

Wisdom from Rose: "On the street of by the by, one comes to the house of never."
Wisdom from Len: "This too shall pass." 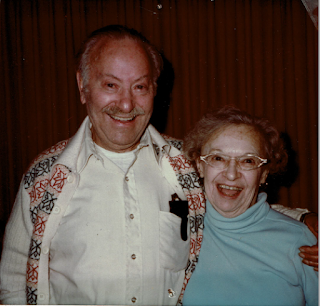 My grandfather, Henry Fuchs, my father Len’s father. Henry was a wise and gentle man, who had strong faith in God. Henry was married to Anne Fuchs (my father’s mother) for over 50 years. When Anne died, he made a second marriage to Bea Winston.

My grandmother Anne Fuchs, my father Len’s mother. Anne had a heart condition that severely limited her ability to function. Preparing a Sabbath meal for our family tired her out. My two sisters and Ihad to be very quiet and good when we were around Grandma Fuchs. When I was 10, Anne had a stroke that paralyzed her right side. She walked with a brace and she could not speak except in jumbled up words. Because of her health problems and to my great regret, I hardly knew her.

Anne and Henry had only one child, my father Leonard.

Wisdom from Grandpa Henry "You are in the thick of it and that is a good thing, but it is hard. Pray to God and write to God and talk to us. We are your inner resources. We are inside you."
Wisdom from from Grandma Anne: "I am an observer from all these years of not being able to talk. Sometimes it is good to observe and to take time to listen and to breathe." 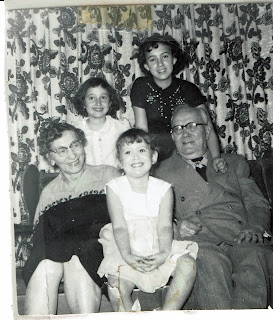 Anne and Henry 1955 with their granddaughters Betsy, Judy, and Sue

My step-grandmother Bea Winston Fuchs. To Bea, my sisters and me were accepted as if we were her own granddaughters. Bea and Henry were married almost 20 years. They both died in 1979, Henry in March when he was 99 years old and Bea at age 80 two months later in May.

Wisdom from Grandma Bea: "Embrace and love your family and your step-family equally. Much joy came to me and your Grandpa Henry from joining our families together." 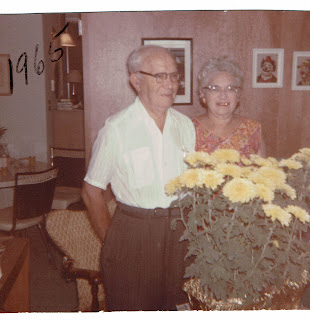 My grandmother Anna LeBrint, my mother Rose’s mother. Anna and my grandfather Abe had five children within eight years. She felt that having so many children was a burden. In addition to being a mother, she was a business woman, buying and selling two flats and three flats in Chicago’s Albany Park neighborhood.

My grandfather Abraham (Abe) LeBrint, my mother Rose’s father. To quote my mother, Abe “had a love affair with America” and had a successful printing business in partnership with an American born friend.

My aunt Perle LeBrint was the youngest of Anna and Abe’s five children. She lived with and was financially dependent on her parents her entire life. Perle was diagnosed with type 1 diabetes at age 27 in 1945. Anna watched out for Perle after the diagnosis, ensuring that her daily insulin was administered safely and correctly. Perle died in 1965, four months after Anna died.

Wisdom as told by Grandma LeBrint to her daughter Claire: "I want my children to do well, take vacations, have careers, and marry well."
Wisdom from Grandpa LeBrint: "Dare to take advantage of all the opportunities our great country offers and to step out of your comfort zone. In my life, I didn't have the nerve to follow this advice as fully as I might have, but you can do it."
Wisdom from Perle: " Mine was a comfortable safe life with no complications so it seemed. But safety and comfort are overrated. Get out there and keep taking chances. I wish I had." 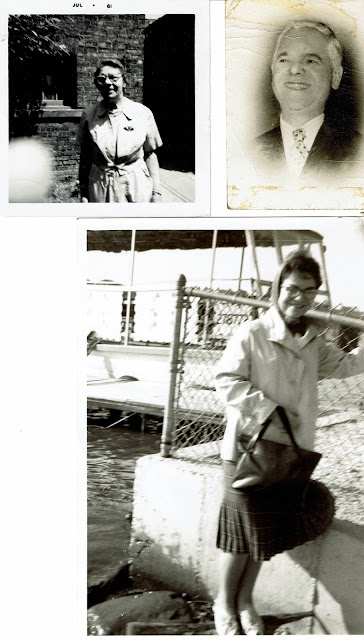 My aunt Claire LeBrint Metzger, the fourth child of Anna and Abe. Claire was a single working woman in Chicago until age 53 when she married Rolland Metzger and moved to Dixon, Illinois,.

Uncle Rolland Metzger came into my life after he married Claire in 1967.

Claire and Rolland had one house in Dixon and a second house in Chicago. I was very close to them and would sometimes drive to Dixon to visit, but frequently they came to Chicago to go to the theater, their favorite restaurant Ann Sather’s and also to join us for holiday meals at my house. Claire and Rolland survived my mother and father. Claire died in 2002; Rolland in 2005. They were like parents-contemporaries- friends to me. They had a young attitude and enjoyed keeping company with me and my husband (when I was married) and my friends.

Wisdom from Claire: "My philosophy was 'Life is full of ups and downs,' but I didn't always remember this philosophy when I was in a down period. I hope you will do better at remembering."
Wisdom from Rolland: "Put your money in Roth IRAs." and by his example: Diversify your career skills and find new ones after retirement. (He became a computer expert and tax consultant after retirement.) 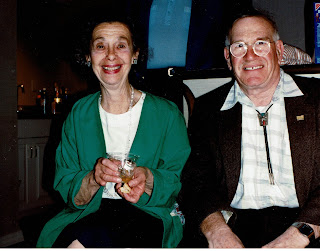