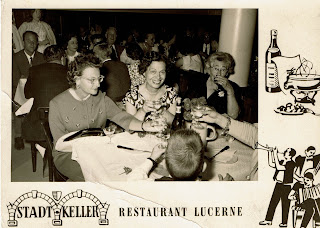 During the late 1950’s when I was in my mid-30's, I scrimped and saved enough to take one trip to Europe. We went to Paris, that I remember, and to Switzerland. Probably also to London but I'm not sure. In the postcard, I'm wearing the flowered dress, happily eating with friends I met on the trip.

But…my dream of becoming a published writer and my hope of finding a nice single Jewish guy to hang around with and possibly marry – neither was happening. That is, not until Rolland Metzger of Dixon, Illinois came along. He visited Chicago some weekends to get culture and to see if he could find a nice Jewish woman to woo and marry.

In 1960 we two Jewish singles met and started keeping company.

Rolland thought I was wonderful and amazing, talented and full of life. He believed I could do anything I wanted. He couldn’t convince me to marry him until 1967, but in 1962 he helped me to follow my dream of being a writer.

I had discovered the Famous Writers School correspondence course, founded by Bennett Cerf, a well-known publisher/author, and other "famous" writers. I remembered taking the course, that was all. Then I found several workbooks from the course and I see the advertising flyer with this Bennett Cerf  quote,“Do you have a restless urge to write? If you do, here is an opportunity for you to take the first important step to success in writing.”

Even though many years have passed, I remember the excitement I felt when I contemplated his question and my answer, spoken quietly (to myself), a resounding Yes!

I lost my nerve until Rolland held my hand so to speak -- in reality, he sat next to me -- as I took the big step of enrolling in the course. I registered with the pseudonym Leva Missman, a very catchy name, don’t you think? I used Rolland’s Dixon address instead of mine in Chicago. I was apprehensive about attempting to be a real writer and needed the assurance that in case I failed, no one, not even the instructors, would know my real identity. I was grateful to Rolland for going along with my deception.

The first Famous Writers assignment was to answer the question “Why Do I Wish to Write?” The instructor returned my essay with some well-deserved critical comments. Oh boy, it sure stung to read criticism of my work. You writers out there will understand. Rolland had to hold my hand and sit by my side as I moved from being a writer-want-to-be to becoming a good, or at least a competent, writer. 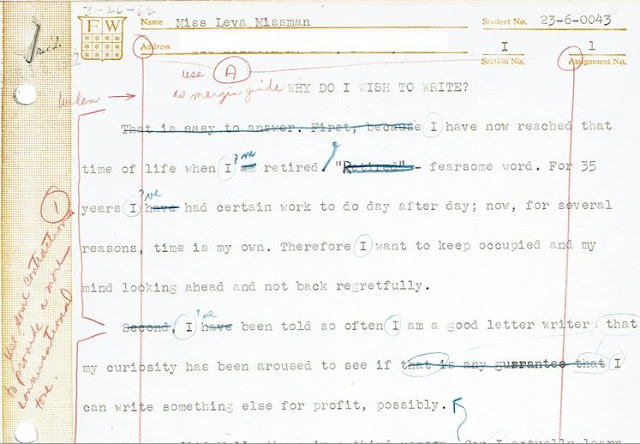 The note identified with (1) includes great advice that I’ve taken to heart and reads:
“Use some contractions to provide a more conversational tone.”

Much about the course comes back when I find a folder labeled “Women’s Angle,” and I see the seven articles published in the National Informer newspaper.

Here's how it happened.

After my first essay, the pieces I wrote for Famous Writers were mostly about how women were taken advantage of at work, when shopping, by loan companies, and even at dancing schools. As I grew more confident in my writing, my instructor informed me it was time to submit my work for publication. He suggested I send one of my stories to the National Informer newspaper for their “Women’s Angle” column. The magazine’s motto was “Truthful News of All Facts of Life.” It sounded good to me. I submitted the story “How American Stores Cheat, Use and Abuse Female Shoppers,”[1] under my own name Claire Le Brint. To my surprise, they accepted it. I hadn’t heard of the National Informer and hadn’t seen a copy, but no problem. I was to be published and paid for my work. I was ecstatic.

A check came in the mail along with a letter indicating that my story would appear in the September 23, 1962 issue. When I got a copy of that issue, I was shocked. The banner headline on the first page was RED CHINESE EAT BABIES! with the subheading in slightly smaller bold print Innocent Children Victims of Communist Prosperity. I skimmed through the paper. Most of the articles were patently false like the cover story, or super-trashy like we find today in the National Enquirer. But you better believe I was very proud of my article, which was “Truthful News of one particular Fact of Life.” I pasted the article on yellow card stock so I could keep it forever and jotted down the date and name of the publication. On the back, I wrote the headline and subheading, then I tossed that tabloid paper in the trash where it belonged.

I was appalled by the newspaper and most of the articles. Rolland and I conferred and we decided I might as well submit more articles to the Informer. The readers, we figured, needed at least some “truthful news,” if only they could recognize it. I was being paid and published, no small feat for a novice writer. Here are titles for the rest of my Informer articles. [1]

So I, Claire Le Brint, had become a published writer! That was enough for me for the time being. Over the next ten years I was busy working, getting married, changing my name to Claire Metzger, moving to Dixon, getting used to Rolland, and traveling to Chicago with Rolland fairly frequently to take advantage of the city's cultural marvels.

But I will never forget the National Informer and my first big break. Can you blame me? What a story that is!

Documents and other pertinent references are listed below.

[1] Titles of articles by Claire Metzger published in the National Informer  refer to documents (copies of the articles) in the Fuchs/LeBrint Archives held by Betsy Fuchs.