I knew Henry Darger, the reclusive outsider artist.  He was my neighbor. He lived down the hall from my ex-husband David Berglund and me and we shared a bathroom!

David and I lived in a three room apartment on the second floor of the building at 851 W. Webster Avenue in Chicago and Henry lived in a room at the end of the hall. We were neighbors from March 1969 until November 1972, a few months before his death. Henry was a legacy tenant from the 1930’s when 851 Webster had been a rooming house. 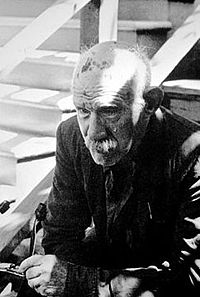 We didn’t know Henry was an artist, nor did our landlord and landlady, Nathan and Kyoko Lerner, nor did any of the other tenants in our building. Henry’s work was discovered after he died: over 15,000 pages of a fantasy novel illustrated by hundreds of water color paintings and a large number of 30 foot wide murals. Henry Darger’s work is exhibited all over the world and has been valued in the millions of dollars.

In 1971, David took this photograph, the only one of Henry Darger in his later years. As he often did, Henry was sitting on the front steps of our Webster Avenue home. You will find this photograph in most publications about Henry Darger. You will also find my formerly married name Betsy Berglund and David’s name in books and articles about Henry. We were sometimes interviewed about our interactions with Henry when he was our neighbor.  David died a few years ago, but I am still asked about Henry by authors and film producers now and then.

I recently read an article about Henry that indicated he lived in an apartment at 851 Webster. Not true!  He had one room, with a small closet containing a sink (no toilet), at the end of our common second floor hallway.  And he shared a bathroom (toilet) with us. As you can see from the layout drawing of the second floor at 851 Webster, we accessed the bathroom from the hallway.

Henry had his own sink and he must have washed up there because to the best of our knowledge, he didn’t take baths or showers. So we rarely had to negotiate who would use the bathroom at any given time.

There was one time, however, when Dave gave Henry a bath. It happened when Henry was sick and very frail, shortly before he had to be moved to the Saint Augustine's Catholic Mission home in Chicago.

Quickly while Dave bathed Henry, I took his clothes and bed sheets to the laundromat down the street and washed them.  His clothes had layers of dirt on them and the bed sheets were gray from ground in dirt. The primitive tent-camper in me was able to handle the grime – though his clothes were much dirtier than our clothes when we would return from a week of back-packing and camping. Kyoko Lerner, our landlady, wrote in the introduction to the book Henry Darger’s Room (published by Imperial Press 2007)  that Henry looked like a homeless person,  dirty and uncared for, as was the too-long and greasy-looking coat he wore. The same could be said about the clothes I washed; they were dirty, greasy and certainly uncared for.

During this time Henry stayed most of the day in bed. Daily I took him breakfast, toast with butter and jelly. I crossed his room to get to the bed, past piles of stuff. Papers and magazines and unidentifiable clutter were piled high on the big oval table in the center of the room, and were stuffed into cabinets and bookcases and were lying on the floor and in the closet. The room, like Henry, looked very dirty and uncared for.  The walls were gray from years of neglect; the piles were dusty and disorganized and looked like they hadn’t been touched in years. Intuit: The Center for Intuitive and Outsider Art in Chicago has recreated what they call the “Henry Darger Room.” See photos and more information at https://www.art.org/henry-darger-room-collection/ The Intuit room is clean and the “clutter” while coming from Henry’s room on Webster Avenue, has been artfully arranged.  It is very different from the real Henry Darger room that I saw when he lived in it.

Henry’s door was often open and we could hear him talking to himself. Once or twice I heard two distinct voices. Henry’s regular old man voice, soft and unassuming, was answered by a higher pitched child-like voice. The conversations were muted and I couldn’t catch the content, but Henry’s voice seemed contrite in response to the other voice which was strong and aggressive and seemed to be scolding Henry.

Before Henry got sick and we got personally involved with him, Dave and I would sometimes peek into his room. We were put off by the papers and stuff piled up and the dirt and by our sense that we were trespassing.  Perhaps a tenant in our building, or maybe a visitor, must have gone into the room and looked closely at the few of Henry’s drawings that were hung on the walls. I don’t remember who told us, but someone reported that Henry had "dirty" (obscene) hand drawn pictures in his room. Later after Henry Darger’s work was discovered and studied and displayed, all could see that the little girls in a number of his drawing and paintings were nude and had penises.  Our thought at the time was that Henry was strange and these particular pictures were harmless and strange, just like Henry.

Henry came into our apartment only once, on Christmas day 1971. Though we were Jewish, our custom was to have dinner with my parents on Christmas day and that year, Dave invited Henry to join us. A Valentine card addressed to David was found among Henry’s treasures and odds and ends. Included with the card was a hand-written note from Henry "For Christmas presents I would like what I need most... ivory soap... shaving cream... and something to eat Christmas afternoon chicken no turkey I hate it."  Henry joined us for  our "Christmas dinner."  He came on time, sat with us at the table and ate what we served.  I hope we didn't serve turkey! He didn’t engage in conversation with Dave or me or my parents.  After dinner, he quietly and quickly left and went back to his room. 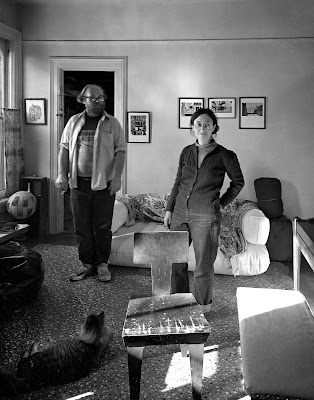 Many have seen Darger's paintings and drawings; some have studied his written works.  There has been much about Henry Darger the person in books and articles and films, quite a bit of it speculation.  The last time I visited the Intuit Center for Outsider Art and viewed Henry’s room, I realized I had another perspective on the Henry Darger Story.  Hence I'm sharing my remembrances of Henry, when he was the Berglund's down-the-hall neighbor.

I end with a picture of  the hippy want-to-be's David and Betsy Berglund in our Webster Avenue living room. Behind us is a white blow-up couch and to the left of David is a black bean bag chair. The doorway behind Dave led to our walk-through closet and gave us access to the kitchen and bedroom. Not pictured but to the right of me was the door to the hallway which gave us access to the shared bathroom.

For more information about Henry Darger and his paintings and writings, refer to the many websites that describe his work in detail.

I recommend two books that discuss Henry Darger's life and attempt to give the reader perspectives on Henry's very difficult upbringing, his high intelligence, his limited socialization skills and how these and other factors affected Henry's life and art.   Each author has his/her own theories which you the reader can accept or not.

The Lonely City: Adventures in the Art of Being Alone by Olivia Laing, specifically the chapter "In the Realms of the Unreal" about Henry Darger and his upbringing and his solitary life in Chicago.