Talking Back to Myself: How I Learned to Sail and Soar 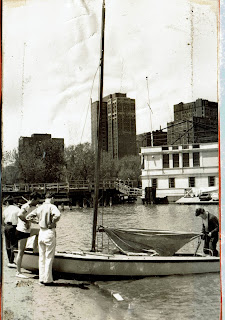 My dad sailed with his pals on Lake Michigan in the 1930s. I have the photos to prove it.
I inherited his love for sailing and at ten years old, I was sailing alone / on my own in a small 13-foot sail boat. My dad taught me during the summers we spent at Cross Lake just north of Antioch, Illinois. He was a good teacher and the lake was little, but always he or my mom would be on the shore watching out for me.  I loved being on my own on the water, gliding along quietly, sailing and soaring with the wind.

After I graduated college, at the age of twenty-two, I defied my parent and went solo to San Frsancisco to live and work, most likely inspired by the song California Dreaming – that was all I knew about that beautiful city. While there I sailed on Lake Merced in a one person Sunfish and also sailed a few times on the San Francisco Bay with a youth hostel group. At the end of one year, I returned to Chicago to find a mate, get married and become a responsible adult.

Soon enough I married a fellow Chicagoan and we settled down. Now and then I’d meet someone who had been sailing on Lake Michigan, but in a strident internal voice, I told myself, Your time for solo adventures is over, and added apologetically, Sorry. You can’t go sailing.  I never questioned the voice. I wanted to be a “good wife,” in the best early 1970s sense: putting my husband’s wants and needs first, internalizing his unspoken message “You can’t go off on a solo adventure; it is would put our marriage in jeopardy.”

The marriage didn’t last and in the 1980’s I fell in love with a woman. We would have married if it had been legal. Still I wanted to be a good partner to Katy, wanted to please and support her, and my inner voice continued to warn me not to go on solo adventures.  Except once when against her expressed displeasure, I got up at the ungodly hour of 5am to take Tai Chi classes at the lake. My little assertion of independence felt like rebellion. You might be asking: wasn’t I already a feminist and rebellious, living with my ladylove? Bravery takes many forms and it took all the courage I could muster to take the classes, going against what I perceived as Katy's wishes.

Katy and I were no longer together when I found information about Brooke Medicine Eagle’s “Singing the Sacred” camps in Montana. Attendance at the camps promised excitement, enchantment, a real adventure. Still my inner voice said, No. You can’t go. This time I talked back, Yes you can. You can go to this camp, on your own / alone. Remember, you did things like this years ago and you can do it now.

Twenty-two women attended the camp. We slept in tents and each day we were awakened by a camper who drummed outside our tents and sang:

Waken, Oh awaken, from your dreaming, birds are singing in the tree-tops…

Waken, Oh awaken, something’s coming, something beautiful for you…”

Our days were beautiful, full of singing and chanting, while we walked to our meals, when we were outside, on rainy days sitting in a circle in a Yurt, and once in a deep dark cave where our songs echoed against the walls and ceiling.  Sometimes we would sit in the tall grass and drum and sing for hours. In this photo I'm on the far right, playing on a big drum, with a short hair and sun glasses. Other times Brooke would share Native American teachings with us. 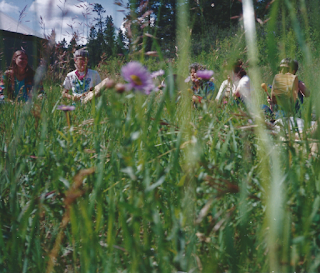 Before camp ended, Brooke gave each of us a name to reflect our new selves. Mine was “Soars with the Drum Call.” Brook explained that I could “soar” beyond my life as it had been and the drum call would remind me to listen to my own heartbeat, to my own true self.

The name might have been inspired by our horseback riding experience. I had shared with the group my life-long fear of horses which went back to a summer at Cross Lake. I was nine or ten years old, small and short for my age. I had been lifted onto the back of a horse which seemed very high up and very scary. Right away, I asked to be taken off. My friends spent the afternoon horseback riding, while I waited in the car.  My camp sisters encouraged me to get back on the horse. I was still short and small; the horse was big and most likely someone had to help me get on up on the horse. I was uncomfortable in the saddle but it was lots of fun.

I got back on a horse in Montana. It was time to get back in a sailboat in Chicago. This time my inner voice said joyfully, Yes you can. You can go sailing.

I signed up for lessons at Burnham Harbor, just south of downtown Chicago. We would learn to crew with others, sailing on a 25/30 foot boat. Signing up for the lessons was easy. Getting to the lessons was hard. My inner self was freaking out, How will I find Burnham Harbor? Where will I park when I get there? I’ll get lost and be late and they will sail without me. I left home early, found the harbor easily in plenty of time for our first on-shore class.  I continued to freak out, worrying, Will I ever learn what to call things on the boat?  Will I be able to tie the knots?  I can’t tell which way the wind is blowing.  Will I be kicked out of class? I’m 55 years old and stupid compared to the youngsters in my class.

I hadn’t even gotten on the boat yet!

Over the course of the eight-week class, I learned some of sailing terms. I never learned how to tie knots and was never able to identify which way the wind was blowing but they let me on the boat anyway. The teachers were at once patient and impatient and never kicked me off the boats. And I learned to sail! Actually what I learned was to be part of the crew.

The next summer, I took more sailing lessons and got a little better at crewing and took part in some evening races on Lake Michigan.  We never won a race, but it didn’t matter. We sailed at sunset; all the boats had colorful spinnaker sails ballooning out, catching the wind, sparkling in the late afternoon golden sunlight. We were sailing. Soaring. I was in heaven! Later that same summer, I took private lessons on a Sunfish in Wilmette Harbor. During my fourth lesson, I sailed by myself, with the instructor nearby. But I was alone / on my own. Loving it!

I stopped sailing because of health problems, but kept soaring. In 2001 I went on my first trip out of the country by myself, to a Yoga retreat in Cancun, Mexico.  While there, I wrote in my journal: “Action starts with bravery. Bravery for me at this time is traveling to a new country by myself.  I’m scared but I do it.”

I'm 77 years old now. And my heart beats steadily for which I am most grateful. And my inner voice still speaks to me, these days softly and graciously saying, At your age it's perfectly ok to stroll along the lake  front with friends and enjoy watching the sail boats.

Posted by Betsy Fuchs at 5:28 AM No comments: