MY FATHER ABRAM LOBERANT and his cousin Anna Menkes, my mother, were both born in 1885 in Czarist Russia. They lived two hundred miles apart, Abram in Kishenev, Bessarabia and Anna in Ovidiopol,/Odessa, Ukraine. In spite of never having met, the families decided they would marry – in America, in Chicago.

Here's an excerpt from "My Family's History in Russia and the U.S." written by Rose LeBrint Fuchs, my sister and, I must say, a fine writer.

Terrible pogroms swept Russia in 1905, especially in the south where most of the Jews lived.

My mother’s mother made up her mind. Two half-brothers of my mother (Anna)  were well established in Chicago with their families and kept urging that my mother be sent to them. Quickly an engagement was arranged between my parents-to-be. My father (Abram) had already been inducted into the Russian army so my mother was sent on ahead, to earn a little money, to borrow some from her half-brothers, so that my father could bribe his way out of the army, come to America, and marry her.

My mother said that parting with her mother was the most terrible thing that ever happened in her life, both before and since. She cried a river of tears, begging not to be sent away. Her mother was ill and both of them knew they would never see each other again.

Nevertheless, the plan was carried out. Two years later my father arrived in Chicago and began his life-long love affair with this country.

I cry a river of tears every time I read the part of this story about my mother Anna having to leave her mother forever. There must have been so much love between them. I cry for her loss and also for whatever it was that made my mother – in America – unable to love me. I could speculate that by the time I was born, she was weary of having babies. I was the fourth child born to her in five years. Or it could be that I was born after George, the sought-after son, and that Mother was not very interested in yet another daughter, the third daughter after Rose and Mary. But what’s the use of dwelling on this. I try to stay positive, so I will stop speculating and get back to the story about my parents coming to America.

During his time in the Czarist Russian army Abram Loberant had a photograph taken of him in his Russian army uniform. Even though Father was conscripted into the army and anxious to get out, he was very proud of this photographic portrait. He and Mother had it handsomely matted and framed and during their lifetime, it was prominently displayed in their living room for everyone to see.

Father came to America in the winter of 1907 and took the name Abraham LeBrint. August 1908, in Chicago, Illinois, U.S.A. Abe and Anna married. In a photograph taken on their wedding day, they are standing stiffly side by side. Anna wears a white dress and has flowers in her hair. Abe wears a very American suit and tie. Also in the picture are Anna’s half-brothers and their wives 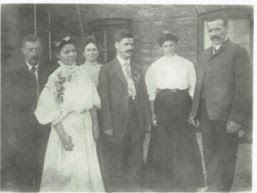 Besides their wedding picture, among all the photographs saved by my sisters Rose and Perle that are now in my possession, I’ve only found one other picture with the two of them together. It was taken at my older sister Mary’s wedding in 1931. 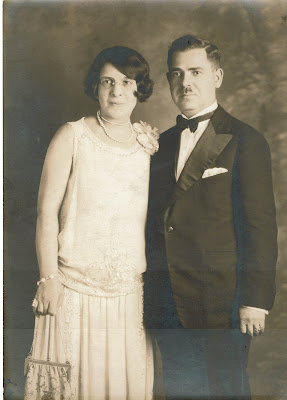 Good looking couple aren’t they? And don’t they look prosperous? They were doing well financially due to Father’s successful print business in downtown Chicago.

But they were so different. Mother was bossy and often angry. Father was a mild man who worked long hours and when home, he tried to stay out of Mother’s way. And I for one couldn’t blame him.

When I look at these two photographs and think about my parents, I feel sorry for them, that they never had the kind of loving relationship I have with my dear husband Rolland. That's all I'll say on this subject for now. More stories about me, my siblings Mary, Rose, George, and Perle and my parents coming, I promise.


This story is from Clara’s Stories: An Imagined Memoir inspired by the life of Claire LeBrint Metzger. The novel is a work in progress and Claire, the narrator, writes her stories at age 80 in 1994 .

Posted by Betsy Fuchs at 6:05 PM No comments: