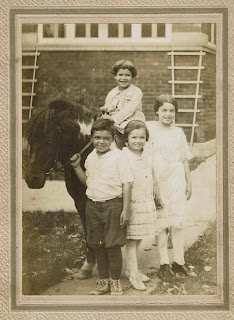 In the early decades of the twentieth century, some professional photographers traveled the neighborhoods, bringing ponies to fancy up the pictures. Families paid extra to show off the kids on and around the pony. “What a photo to send back to the family in the old country,” my mother would say, adding “Won’t they be impressed!”

After our family got a Kodak camera in 1924, we took our own photos, at home, at Lake Michigan, anywhere and everywhere. But before then on a few rare occasions, we had formal photographs taken by a professional photographer. In one, I’m sitting happily on a pony with a tooth gapped-grin on my face, wearing a long-sleeved slightly oversized white dress with a peter pan collar.

In front of me and the pony, my older brother George stands, wearing a white shirt, dark colored knickers and athletic shoes. Next to George are my “twin” older sisters Mary and Rose. They weren’t twins, but that’s what I called them. They were one year and a few months apart in age and different in stature and looks, but like twins they lived in their own shared world, to the exclusion of everyone else, especially me. The photo isn’t dated but I would guess I was 3 1/2, George 5, Rose, 6 1/2 and Mary 8. The twins are both in white knee length dresses, with white stockings and they are holding hands.  Around the same time, the twins, at the insistence of our fully Americanized same-age cousins, learned how to stop speaking English in a Yiddish sing-song kind of way. And the cousins taught them how to dress properly for school, in bright white starched and ironed blouses, clean pressed skirts, with their shoes polished daily. 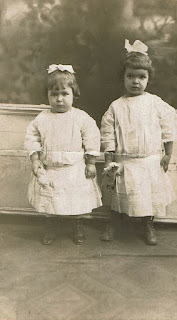 In another professional photograph, taken before I was born, a very young Rose and Mary stand side by side. Rose has a serious look on her face; Mary’s is more quizzical. Rose is fair skinned favoring Father’s coloring and has a chubby baby face and fat arms. Mary who is a bit taller than Rose is swarthy, taking after Mother and if once she had baby fat, it’s gone. They are wearing not-quite-matching white dresses that hang almost to their ankles and large white bows in their hair. Most likely these dresses, and the ones we girls are wearing a few years later in the pony picture, were bought to last through growth spurts and were saved to wear only on special occasions. Mary and Rose have almost identical brown leather high-top shoes and are holding little porcelain dolls, also dressed in white. Just like the pony, these dolls must have belonged to the photographer. At home all we had were Raggedy Ann and Andy dolls that Mother made out of old flour sacks.

The twins got to hold the dolls. I got to sit on the pony. Lucky me! Or maybe lucky them because in 1921 Mary and Rose had a second professional photograph taken of the two of them, dressed like twins in matching outfits, looking self-assured and a bit smug, especially Rose with her head cocked to the side. 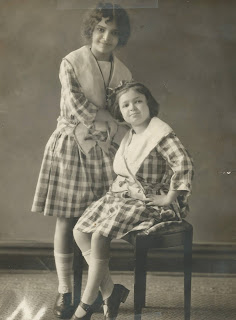 Neither George or I, nor three-year-old Perle had our pictures taken professionally in 1921.

The twins had each other and I had George, who allowed me to tag along as soon as I could toddle after him. And shortly after George went to full-day school at age six in 1918, I had baby Perle who was born a few months later. From then on until I went to full-time school in 1920, I had Perle to play with. When she was a baby, Mother let me feed her and dress her and rock her and when she got a bit older, Perle toddled around after me.  Perle was so much better than a borrowed porcelain doll or the home-made Raggedy Ann and Andy dolls.

Thinking back to this sibling configuration, I realize this is how we stayed into our adult lives. Mary and Rose together, the married women with husbands and children. George the only boy making his way on his own. And me and Perle, the two unmarried spinsters palling around, that is until 1965 when Perle tragically died too young at age 47 and 1967 when I finally married for the first and only time at the ripe-old-age of 53.

*Note: This is another story from Clara’s Stories: An Imagined Memoir Inspired by the Life of  Claire LeBrint Metzger.  At this time Clara's memoir is an on-going work in progress by Claire's niece Betsy Fuchs.

The Clara Stories are dedicated to
Claire LeBrint Metzger, of blessed memory
b 1914 - d 2002
Posted by Betsy Fuchs at 4:55 PM