My correspondence (since 1931) with my Spanish pen-pal Jesus was interrupted by the Spanish Civil War which started in July 1936. Though there were no letters from Jesus that year, I continued to write to him infrequently. I hoped to hear back even though I understood that the war slowed down (or stopped) mail between America and Spain.

Then one fateful day in 1937, a postcard arrived. Today, many years later, I I'm looking at the postcard dated May 1937. 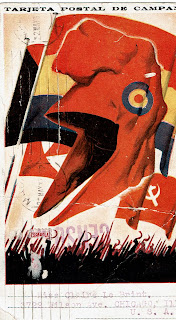 When I see its provocative drawing of a red hood (which looks a lot like a white KKK hood) plus a flag displaying the Communist Hammer and Sickle, the encounter between me and Ma comes back in vivid detail.

Ma and Pa were immigrants from Russia. Ma came to America in 1905, from a small town near Odessa in the Ukraine. Ma was sent here by her mother to get her away from the frequent and ferocious pogroms against the Jews. For Ma anything and anyone Russian (except Jews from Russia) was bad and dangerous to our well being. She despised the Soviet Union (which included the Ukraine) and by extension Communism.

Pa was from the cosmopolitan city of Kishinev, Bessarabia Russia, and like many young men at the time he had been conscripted into the Tsar’s army for fifteen years of service. By 1907, Ma and her American cousins in Chicago (on her mother’s side) raised enough money to pay the required ‘”ransom” to get Pa out of the army and bring him to the U.S. This arrangement was contingent on his agreeing to marry Ma,  his first cousin (on their father’s side). Before Pa’s conscription, he had been active in one of the many Jewish Socialist organizations in Kishinev. Pa was sympathetic to Communism, and after the fall of Imperial Russia, he hoped that the Soviet Union’s noble experiment with Communism would make a better life for all who lived there.

Pa wasn’t alone in his sympathies. In the 1920’s and 1930’s there was a strong Socialist movement in the U.S. and a smaller but devoted membership in CPUSA (Communist Party USA). Also, some Americans, including my sister Rose and her husband Len, supported the Republicans (“Reds”) during the Spanish Civil War. Support for Socialism and Communism all but disappeared in the U.S. when the world learned of Stalin’s ruthless totalitarian rule and when the Red-scare perpetrated by McCarthy happened in the 1950s.

The red postcard arrived during the day while I was at work, and Ma saw it first. When I got home that evening, she was at the door waving the postcard at me, yelling, “Clara, Clara why are you making tsuris for our family by still writing to that man, that goy who I see now is a Communist and a Russian sympathizer?”

I grabbed the postcard from Ma, excited to get something from Jesus, but like Ma I was shocked by the drawing. I knew that Trajeta Postal de Campa translated to “Campaign Postcard.” On the back of the postcard there was a pre-printed section on the top which started Condiciones Para Ganar La Guerra, “Conditions to Win the War” and ended: Del Manifesto del C.C. del Partido Comunista, “Of the Manifesto of the Central Committee of the Communist Party.” I’m sure that Ma looking at the postcard knew what Jesus was mixed up in, what with the Hammer and Sickle on the front and Manifesto! Partido Comunista! on the back.

Ma was pacing back and forth and said in a trembling voice, “Wait til Pa comes home and we will put a stop to this thing you have with that man. You told me you were no longer writing to him and now, he writes about being a Communist. You must burn this postcard. It’s gerferlekt (dangerous) for us to have it.”

I snuck a quick look at what Jesus wrote. His brief message contained the usual chiding and questions and reminders: “I haven’t heard from you lately… Write soon… How is your writing going? Send me something of your work…” Nothing about the war. But there was a censor’s stamp on the front of the postcard, so all he could write was pleasant innocuous things.

Pa came home, late as usual. He worked long hours at The Central Press which was located near the Chicago Stock Exchange. During the Depression, especially after Franklin Roosevelt became president, Pa and his Swedish-American business partner LeRoy Dickenson got lots of work from stock brokers. Then as now, except at the beginning of the Depression stock brokers make out like gang-busters. I wish I had been more of a risk taker and had invested in the stock market during my lifetime. I could have made out like gang-busters too, or I could have lost my small financial nest egg. Woulda, coulda, shoulda. Water over the dam, as they say and in the 1930’s I was glad to be working, contributing to the family’s finances, with a little money left over to buy a pretty dress now and then and to pay for my evening journalism classes at Northwestern.

Ma gave the postcard to Pa and shared her fears about Jesus, not ever calling him by his name. Pa looked at it carefully, quietly. Pa was always quiet when Ma began ranting. He was mild-mannered by nature and kept his opinions, this time about the Soviet Union and Communism, to himself.

As always Ma’s word – along with Pa’s silent assent – was final in our house. Like Pa, I stayed quiet. But I continued to write to Jesus. Our correspondence made my life interesting and his flattery and support of my writing nourished my spirit. And I was intensely curious to learn more of his experience in the Spanish War.

Perle, who was four years my junior, listened to Ma’s ranting from her room. Perle was quiet like Pa and often stayed out of sight. Perle was about to graduate high school and would be helping Ma around the house during the summer. She never went against Ma directly, but agreed to be my co-conspirator and intercept any additional mail from Jesus.

One month later a second postcard arrived. Perle set it safely aside for me. 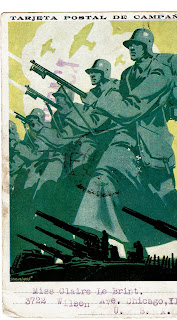 This postcard was dated June 19, 1937 and I am surprised that what Jesus wrote about the war got past the censors.

Esteemed friend Clara: Taking advantage of a forced rest by means of an inopportune gunshot wound to my arm, I hasten to reply to your letter. I don't ask that you pardon my tardiness since you will understand the circumstances we Spaniards find ourselves in, and I do hope you will not blame me.

You needn't be distressed for the fact that it takes me longer to respond to your letters than I would like, but given that, don't cease sending me letters which I await anxiously. As regards my being able to write to you, now I must limit myself to a brief reply as they need to use the typewriter.

Continue sending your letters to my house [in Madrid] as that is how I have been receiving them in the past. I will always appreciate you. Jesus

I pardoned his tardiness, but was distressed about his “inopportune gunshot wound.” I have no other letters or postcards Jesus might have sent during the Spanish Civil War.

*Note: This is an excerpt from the book in process Clara's Stories: An Imagined Memoir Inspired by the Life of Claire LeBrint Metzger. Fictional Clara is writing her memoir at age 80 in the year 1994. The real Claire LeBrint Metzger was born in 1914 and died in 2002, and was the beloved Aunt of Betsy Fuchs.