Rose "Fewkes," Leonard "Fooks" and me 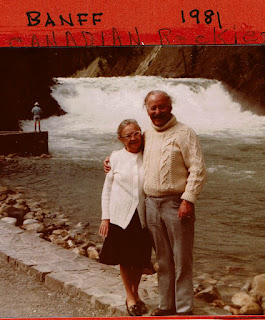 My mother and father, of blessed memory, couldn't agree on how to pronounce their last name. It is spelled F-U-C-H-S. Mom called herself Rose Fewkes and Dad called himself Leonard Fooks. I pronounce our last name Fewkes.

One year while attending services at Beth Emet Synagogue (Evanston, IL), I announced that I was saying kaddish for my father Leonard Fooks. Bekki Kaplan, Beth Emet’s Executive Director, apologized to me, “I’m so sorry I’ve been saying your last name wrong all these years.” “Nope” I replied. “That’s how he pronounced it, so that’s how we pronounced his last name.”

My parents agreed to disagree about their last name. No problem there. But not on political issues. Dad was the rational one who could marshal arguments based on facts he got from Time Magazine and from the Chicago daily newspapers. Mom was the opposite. Not irrational rather she formed her opinions based on her heart and her life experiences. Dad vocally and angrily tried to get Mom to buy his arguments. Mom let him know that her views stood and his well-formed arguments didn’t convince her to change her way of thinking. Here’s one example of how their differences played out: Mom voted for the “senior” Mayor Richard J. Daley because he was personable, and she felt he took care of Chicagoans, like he was our benevolent uncle. Sometime during Richard J’s six terms in office, Dad ran for Alderman of Chicago’s 39th ward as an Independent candidate in opposition to Daley’s Democratic machine. (Dad lost, of course.)

What about me? I learned from listening to their different views on politics that there was validity on both sides. The senior Mayor Daley was personable and took care of us White folks in Chicago, but Daley supported policies that kept our city segregated, kept services unequal and kept patronage strong. Still… the city functioned.

For better or worse I see both sides of the political divide, even today. I know that many Trump supporters and anti-vaxxers are ill-informed about some things; you may think about all things. But they are not stupid and I would never call them “a basket of deplorables,” as Hillary Clinton did. They are our fellow citizens and I believe that many of them have been hurting financially and have been scared for a long time. I believe that like you and like me, they want to ensure that their children will succeed financially and be able to afford a car, a house, and to have children of their own.

And I contend that many Americans believe the government doesn’t have their best interests at heart. Case in point, Congressmen and women who have good insurance, good pensions, etc. etc. and large “war” chests that keep them getting re-elected. Another case in point: who in their right mind understands why our so-called great democracy has the president chosen by electors, not by the popular vote?

Ask me in person to share my political views, or expect me to join you in your strong and vehement criticism of those others and I often I keep quiet. I don't want to debate you. I have my reasons for not getting involved in the discussions of who is right and who is wrong on major issues of today. Some are rational, Some are based on my heart and life experiences. But writing safely on my blog, I can tell you that my way of thinking, seeing both sides, is still with me even though it’s shaky these days  -- what with the Covid Delta variant and especially since the Supreme Court decision on September 20, 2021 to not hear the Texas Roe v. Wade case.

Mom called herself Fewkes. Dad called himself Fooks. They were OK with that difference. But how I wish they had learned to accept each other’s views, or at least listen respectfully.

That’s what I try to do.

About the photograph of my parents: As they grew older, they lost interest in their political disagreements, and instead were in total agreement about the national and international places they wanted to visit, including to Banff National Park, Canada in 1981.

Email ThisBlogThis!Share to TwitterShare to FacebookShare to Pinterest
Labels: Life Reflections, Wisdom from those now dead